The Visionary Imagery Of Mark Henson 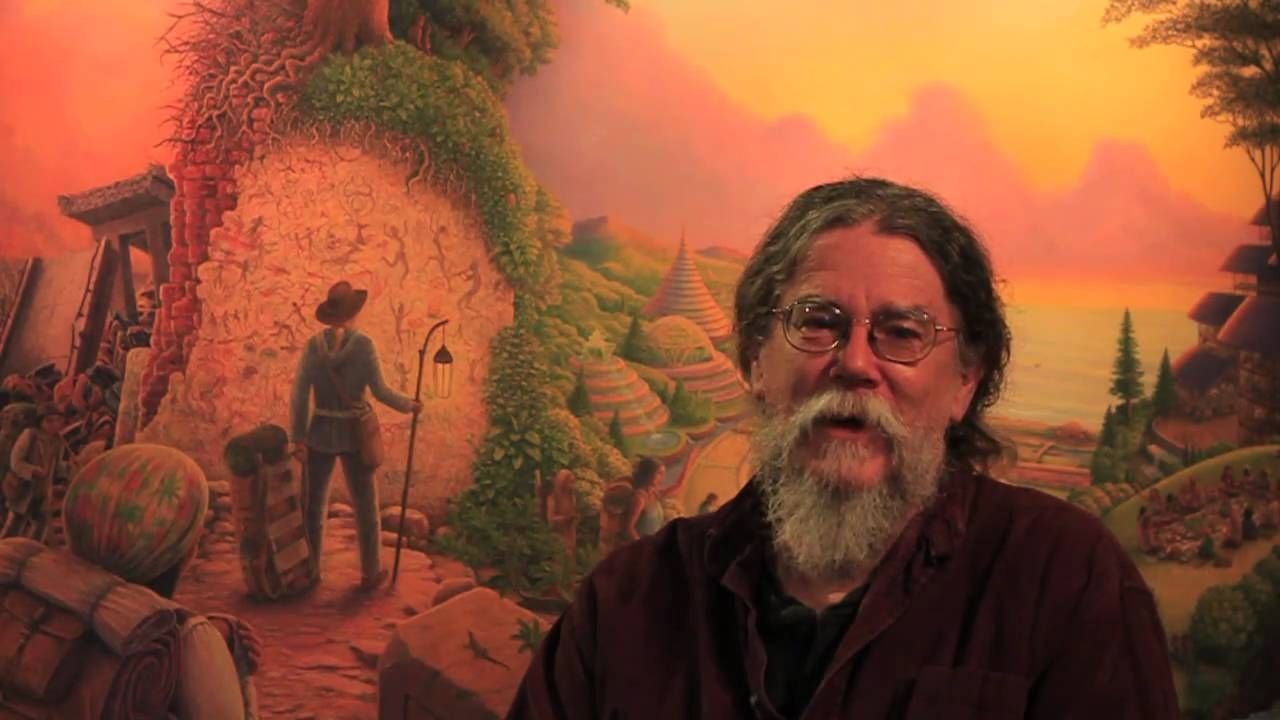 I’ve always been interested in weird stuff. I was elated to discover that through the use of a pencil I could create my own universe, if only on paper. I was lucky enough to encounter some ancient wisdom from India while a youngster, and so I learned to focus my creative ability on what I do best, and to work for the enlightenment of all.

My art tends to be somewhat narrative- I like to tell a story or show a state of emotion or consciousness with my images. I often begin with some sort of idea or theme. This theme might be suggested by anything, or may just drift into consciousness during my day. I am often asked if I receive these images while dreaming asleep.

Sometimes they do come in dreams, but usually they are floating around in my mind, just waiting to be noticed.

While I tend to be a down-to -earth person, when aspiring to creativity, I begin by looking deeply within myself, and seek to express what I may find there. My sincere wish is to tap into the Divine Source of Being, to Consciousness, to Spirit, or whatever you may call it-, that place where existence comes from, and to bring into visual reality images manifesting the knowledge revealed while in this presence. Strangely enough, I have discovered that the more intensely personal my vision is, the more universal its message when presented to the world.

I believe that art can have the ability to catalyze social and cultural changes. Art has the magical power to evoke emotional as well as intellectual thinking. Realizing this, my desire as an artist is to create compelling images of beauty and power that serve to promote our Conscious Evolution as human beings, and to show us how to live in a peaceful world. To this end I like to explore and present images with themes of Awakening Consciousness, Divine Sexuality, Political Realities and Living in Harmony with Nature.

“The Visionary Eroticism and Political Satire Art of Mark Henson “.

Mark’s sense of eroticism expresses itself in a less voyeuristic and more spiritual way than most art associated with human passion. He is more interested in the merging of souls than the merging of organs.

It is his lifetime self-ordained duty to create a body of work that is filled with positive imagery surrounding lovemaking in a culture where sex is often associated with exploitation, violence and abuse. He sees the merging of souls as the manifestation of the cosmic design inherent in all living things.

He calls upon our divinity as natural sensual beings in harmony with our environment by depicting lovers in all forms. He defines lovemaking as a revelation more than a thrill, respectful of the gentle interplay when all creatures are in harmony, including the elements associated with death and the infinite.

In his vibrant colored oil paintings he delights in emulating the divine by bringing something out of nothing into its own sense of existence. Through these images the deepest parts of our collective soul are delivered visually imbued with the core of creation and the love of humanity. Mark views eroticism and the sex ritual as a natural and exalted state of consciousness.

Mark also paints dark side of humanity in his political satires. They are timely icons of universal fear and global concern. We are surrounded by negative input by mass media. The so-called war between the sexes plays an immense role in forming the patterns of our social interactions. How do we depict love when the most truthful loving acts are often considered evil or pornographic by politicians and religious fanatics? Yet, images of war, competition, attempts at control over each other fill our eyes. 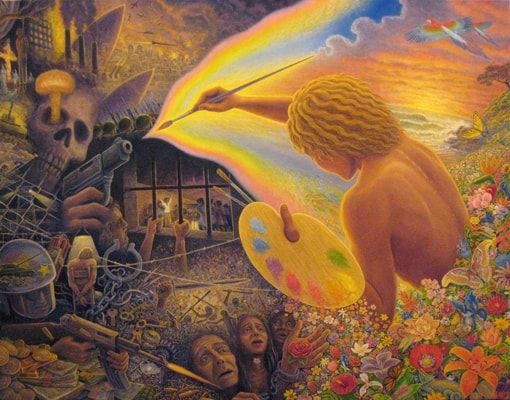 The artist uses his magic to confront the forces of repression.
Using creativity to manifest a positive reality, the natural beauty of life rushes forth in the wake of the action. 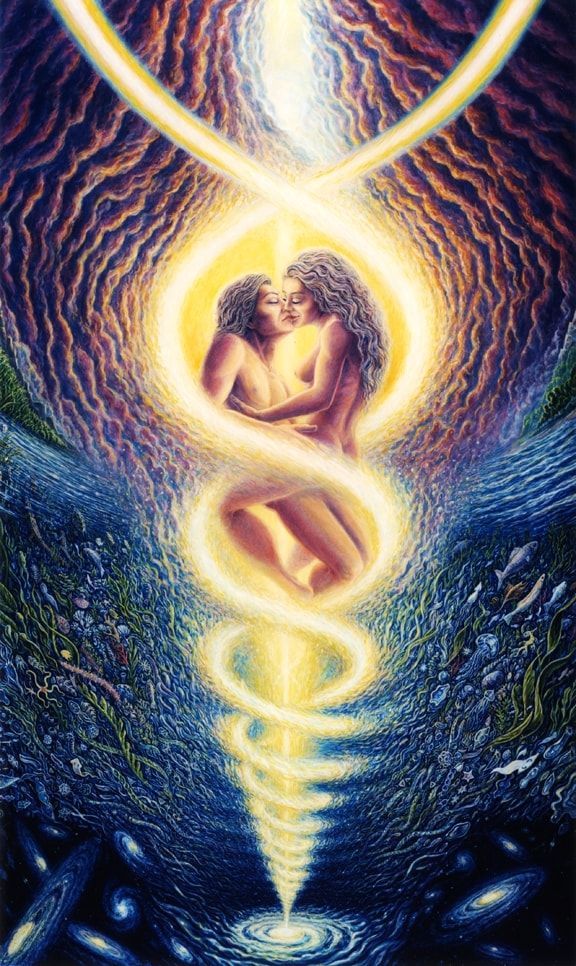 The spiral of evolution culminating in divine union.  As a species, we are yet not done.  as there are an infinite variety of ways to be.  By our loving union,  we offer our bodies as a part of that inward and outward evolution.  Spiritually we combine, becoming forever linked,  genetically we combine,  giving souls new bodies to inhabit. 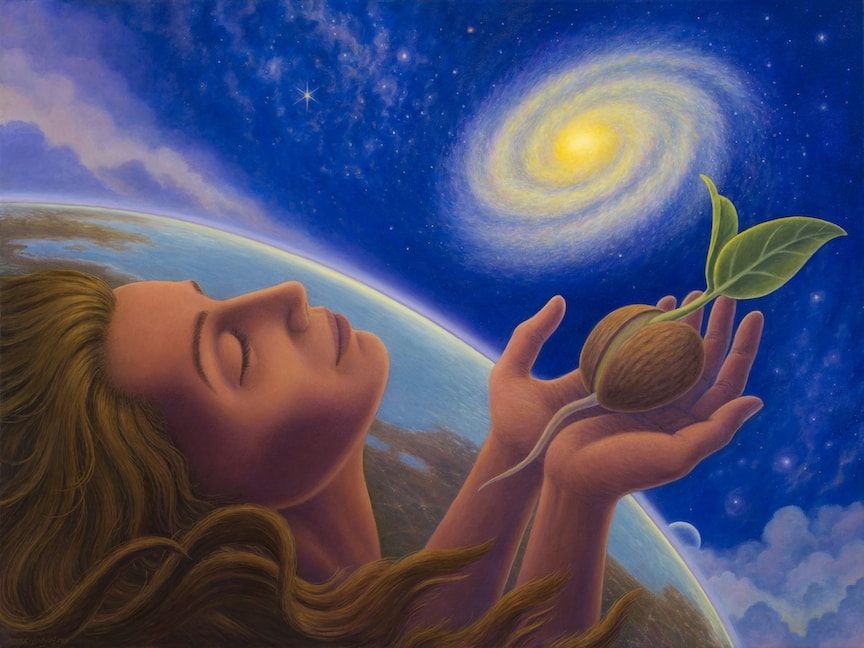 She offers a sprouting seed to the cosmos. All life on Earth is rare. To conceive of the idea that we can share life with the universe is one of our unique attributes.

Eyes of the World

Everything we see is our consciousness looking back at us. 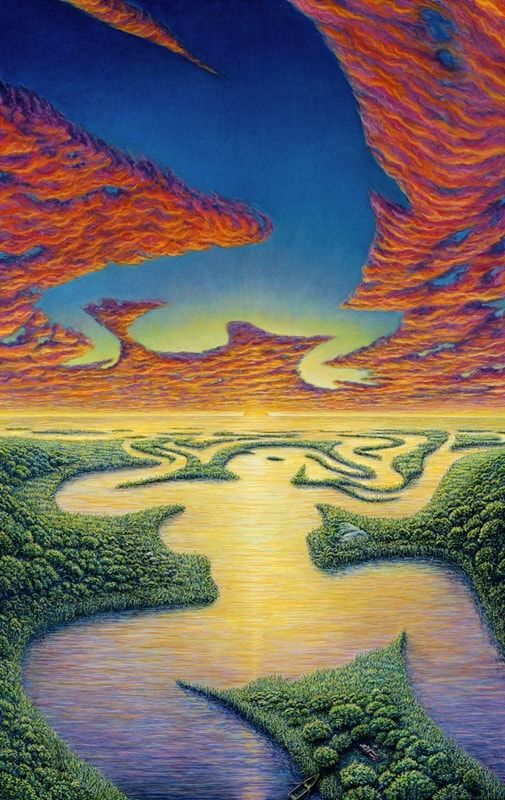 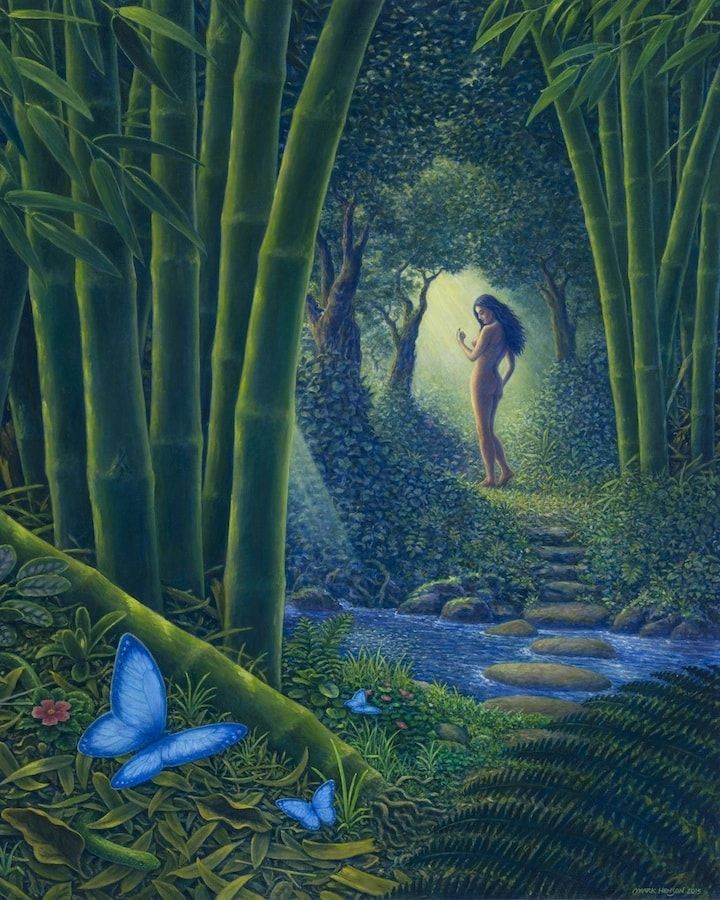 The enchantress beckons you to follow her into the bamboo Forest. 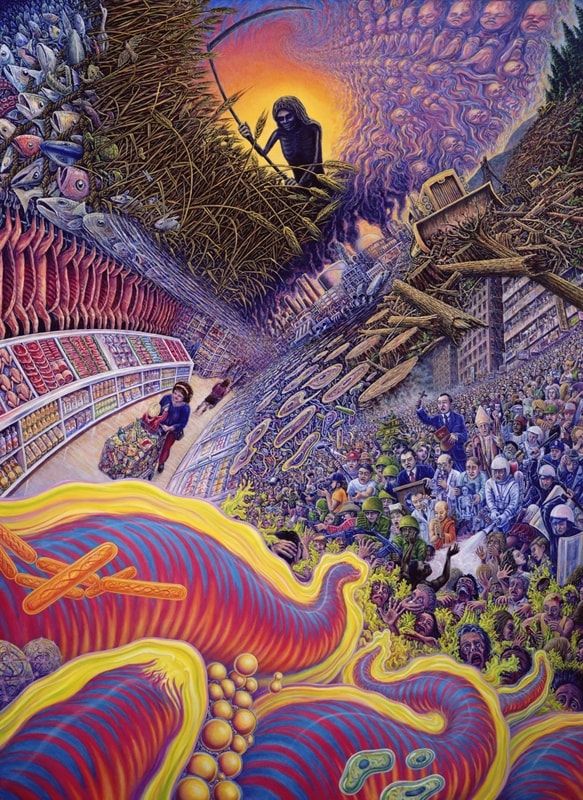 All life is connected. As we  consume, so does life consume us. A figure eight details a vortex of consumption as life consumes life.
In the forefront various microbes, viruses, bacteria rush in to eat our bodies, as the reaper harvests life.
A small boy in the shopping cart points a gun a Mom as she rolls through a grocery display.
Our environmental decay is highlighted by clear cutting and toxic waste, releasing diseases, killing animals and ourselves.
Humans try all sorts of posturing to stop the collapse of our natural world. 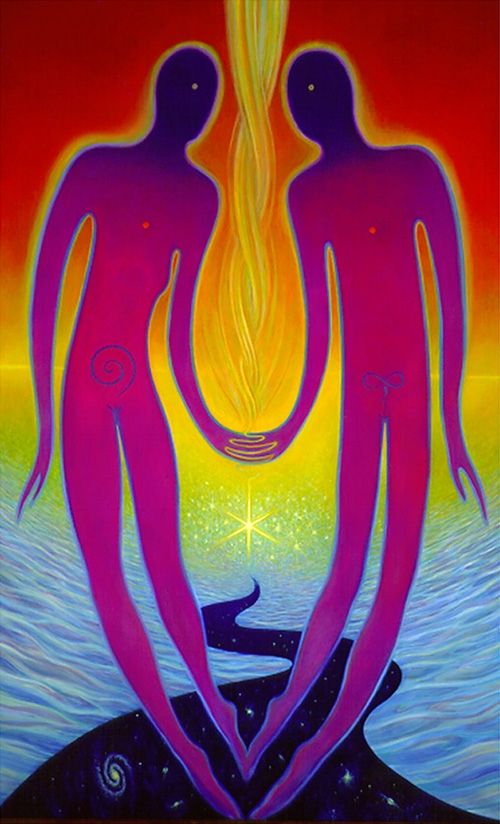 A couple takes a walk through eternity