So with that in mind here I present an interesting collection of some darker trippy psychedelic art from the minds of some talented artists as they try to explore the macabre, the Gothic, the bad trip. The areas where you might be too afraid to go into in case you never make it back out the same as when you went in.
We start of with this harrowing image from none other than psyart legend Alex Grey. Alex usually presents vividly colorful, complex images that reflect a oneness with the cosmic self. In this instance however he shows us that even experienced psychonauts such as Alex are also vulnerable to the negative thought patterns that present them selves in a bad trip. 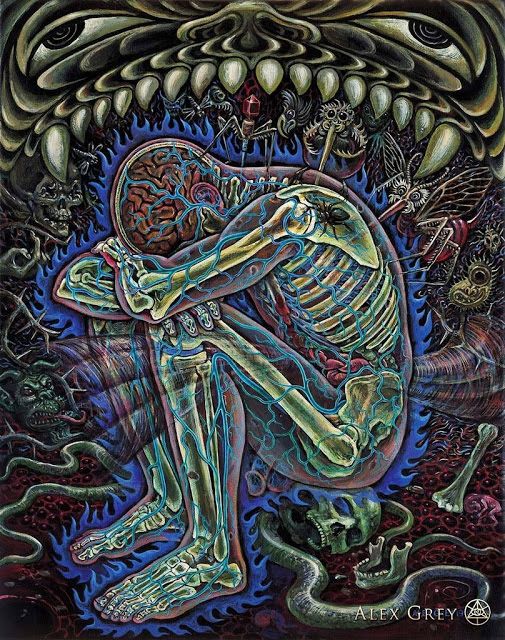 Here we have a twisting horned humanoid like creature which immediately reminds one of the many goat head like forms we see in depictions of satan or baphomet. Artist Laurent Lemoigne is a master of digital art ad has produced many acclaimed images for commercial projects and exhibitions. 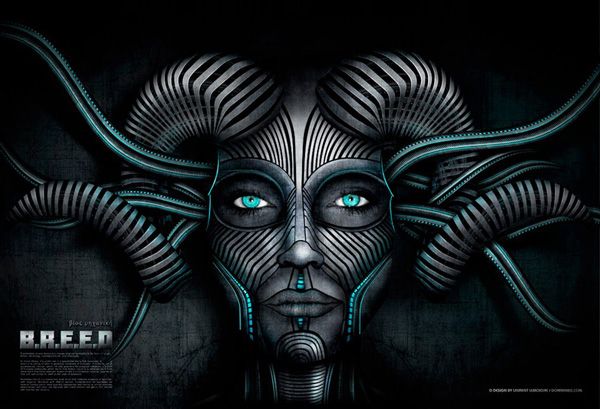 This geometric 3d spiral cube fractal is so trippy it takes all my powers of concentration to understand how designer Dirk Monteny came up with it in the first place. It's like looking at an Escher drawing if Escher has taken a healthy dose of psychoactive substances. I tried to estimate how many individual cubes are in this work of art by my brain ran of of juice leaving me with a numbing headache.  Don't try it kids ! 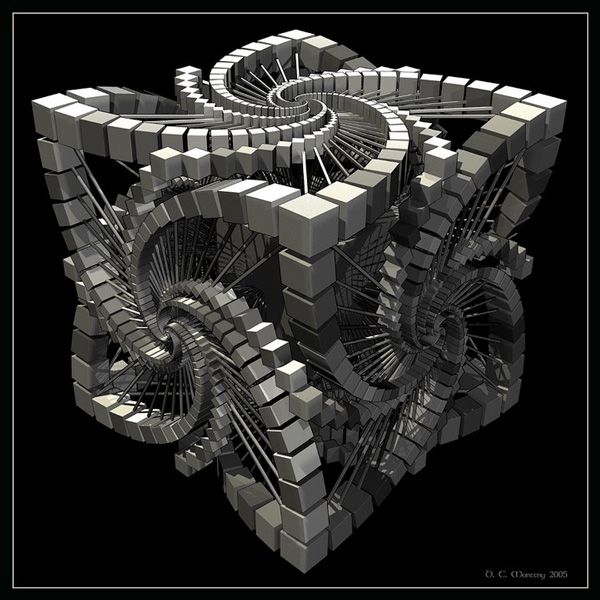 Another Lemoigne image - yes I'm quite a fan. I sort of drew something like this myself one. Not nearly as accomplished as this though. 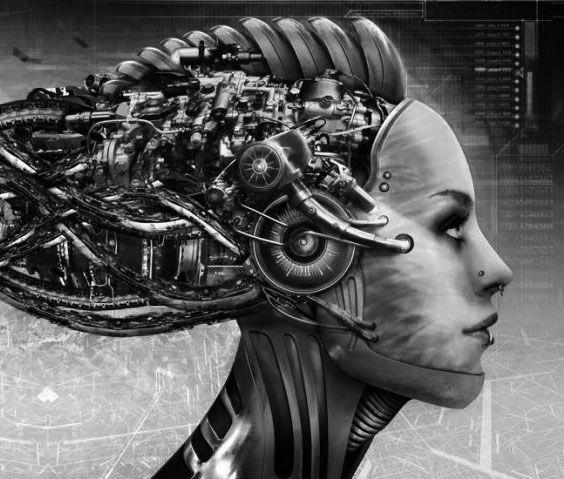 In this image we have a simple rendering of squares and circles across a lattice. All the shapes combine rather nicely into a psychedelic wave of folding spacetime. This sort of thing is often reported by people who take LSD - repeating geometric forms across undulating contours. 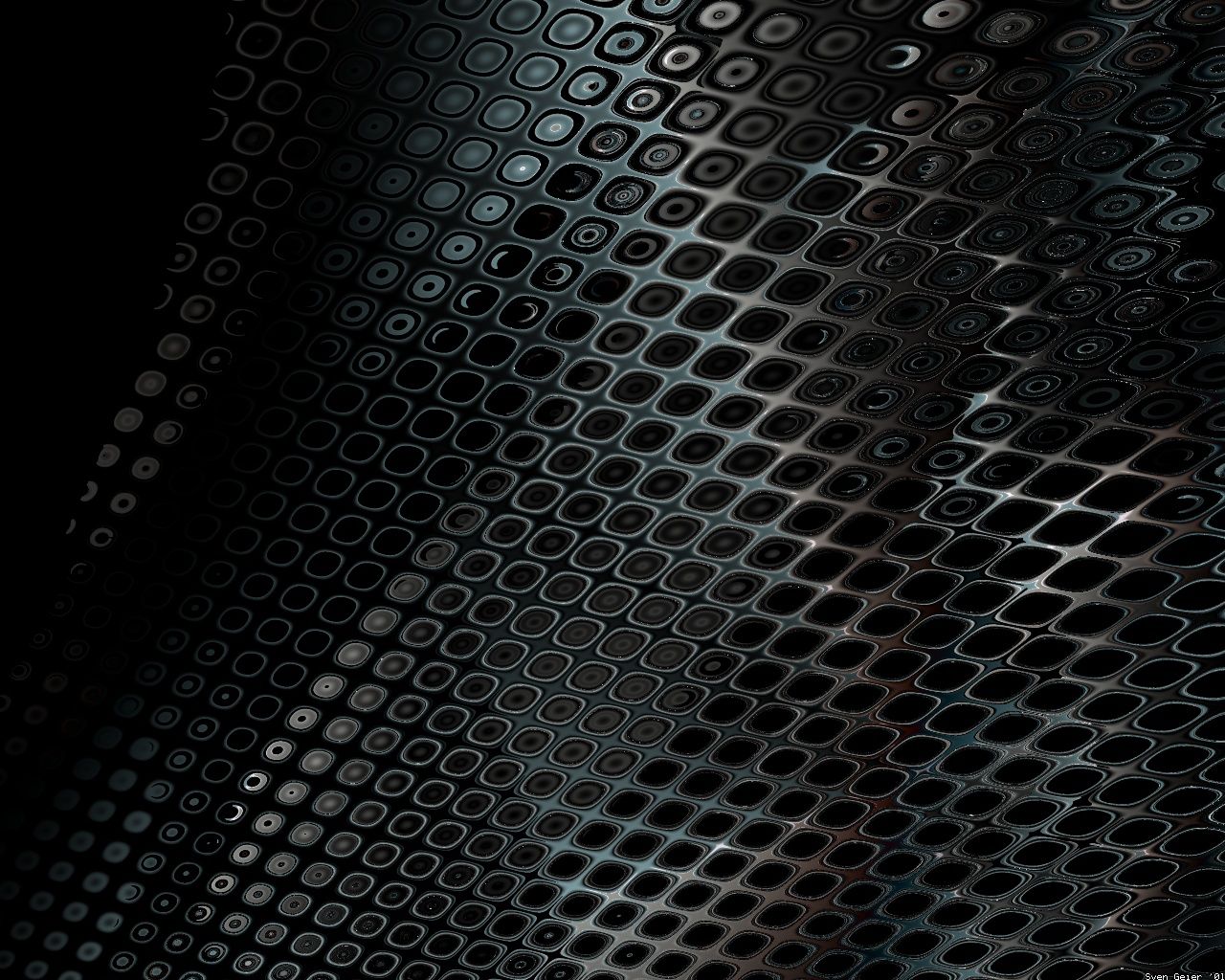 One of the most impressive young psychedelic artists in the airbrush and digiatal art realms right now is Luminokaya, a Russian artist based in Himalaya. Recently he has turned to creating these huge 3d sculpted digital psychedelic masterpeices as you see below. His work always has somewhat something of a dark side to it and is full of the most intricate details. I just want to stare at them for hours. 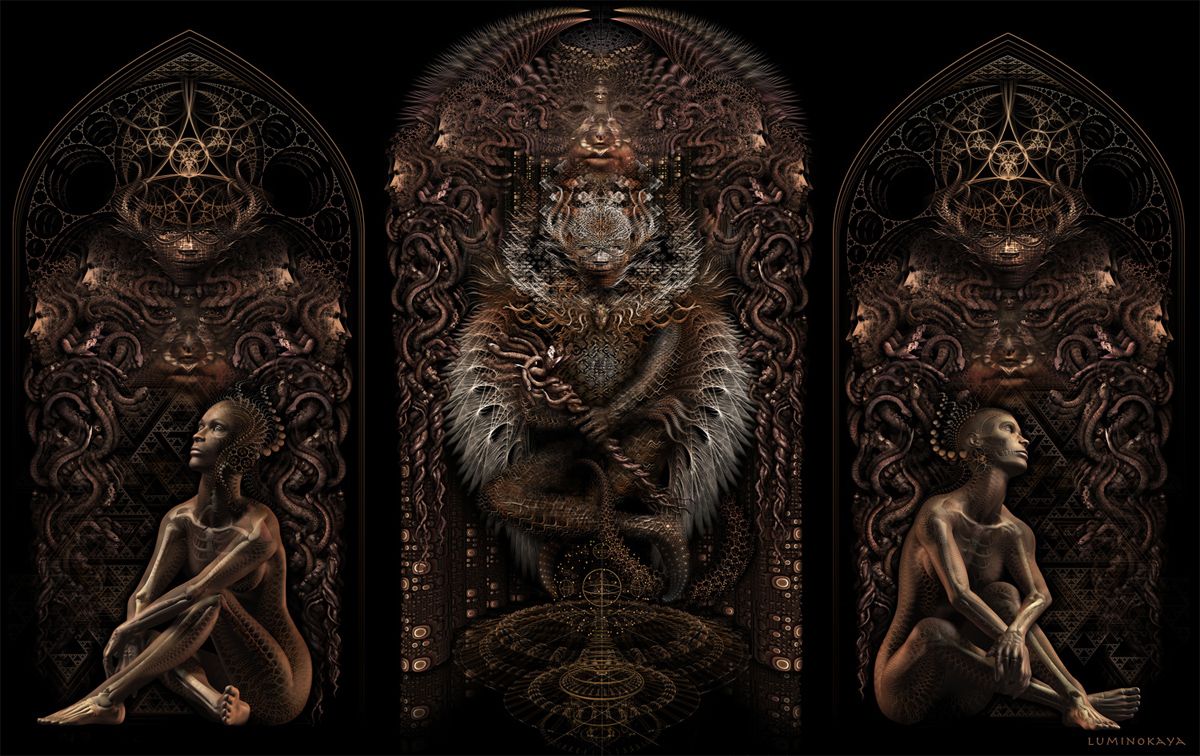 Here is a duo of surreal dark artworks full of skulls. Well, we cant have a list of trippy dark art without a few skulls now can we ? Pretty cool stuff don't you think ? 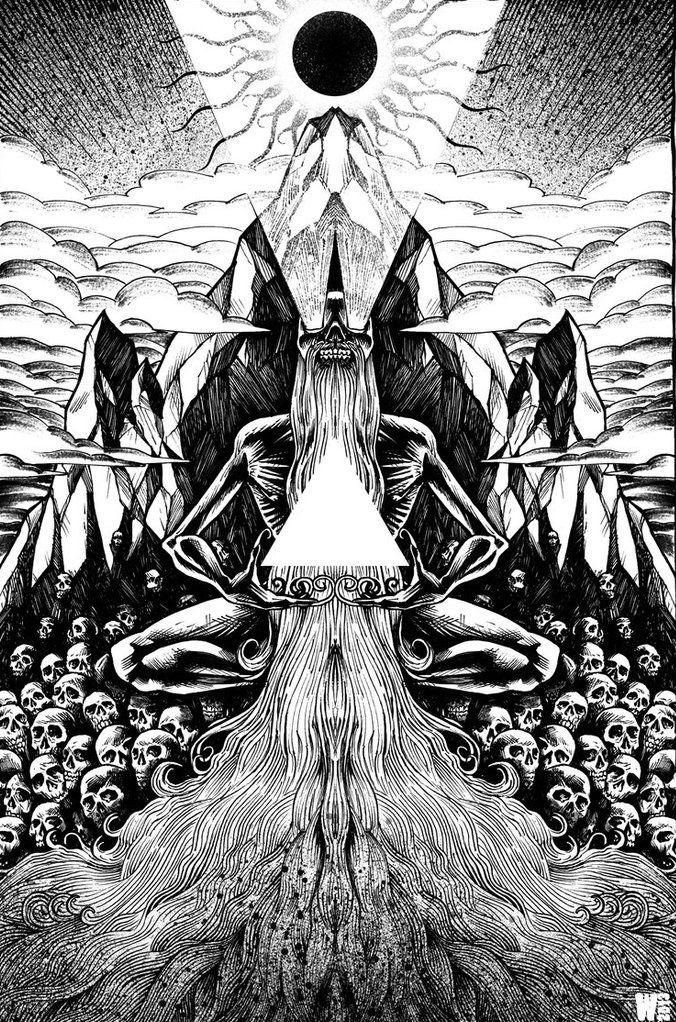 This one is a kind of Giger Alien mixed with Alan Lee LOTR fantasy trip. Definitely not a place I would like to hang out in. Kind of reminds me of some the old album covers I had when I went through a heavy metal phase at around 13 years old. 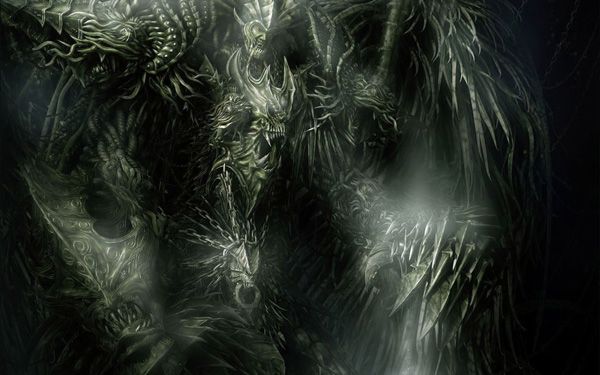 Here we a sweet looking psychedelic landing pad or what appears to be an egg in alien nest. Whatever it is, artist NilNilNil has done a super job of creating a well crafted trip into the the darkness of a deep remote space. 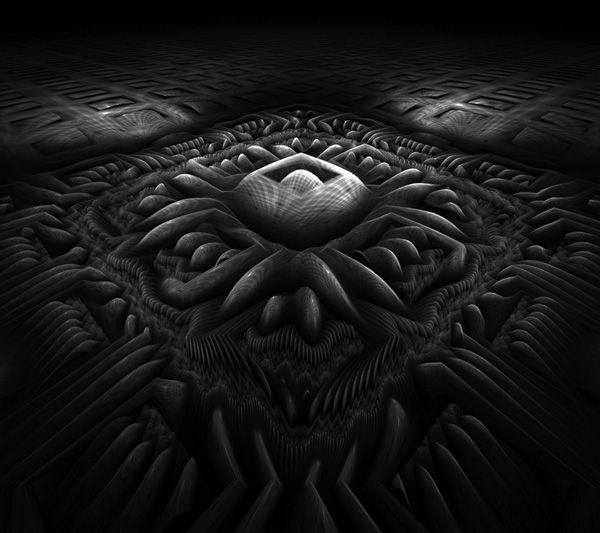 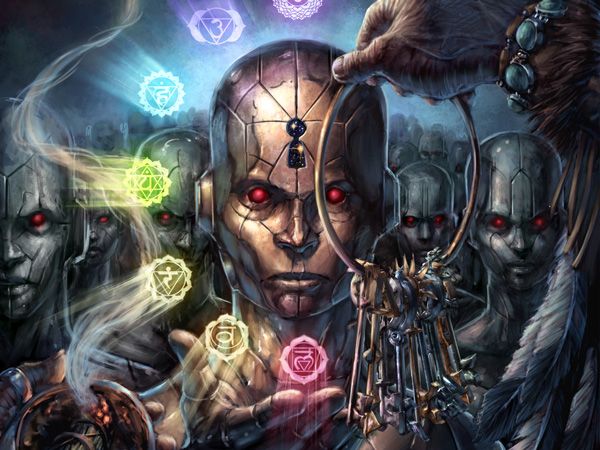 "Opening the Gateways to Inspiration" by NMEZero 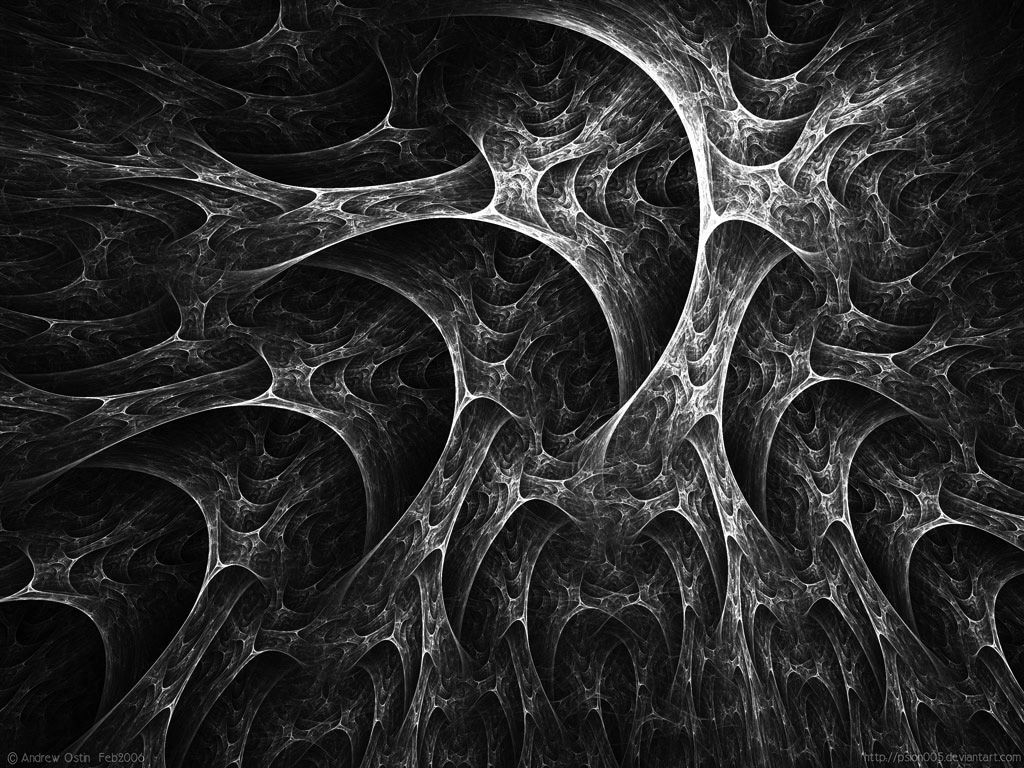 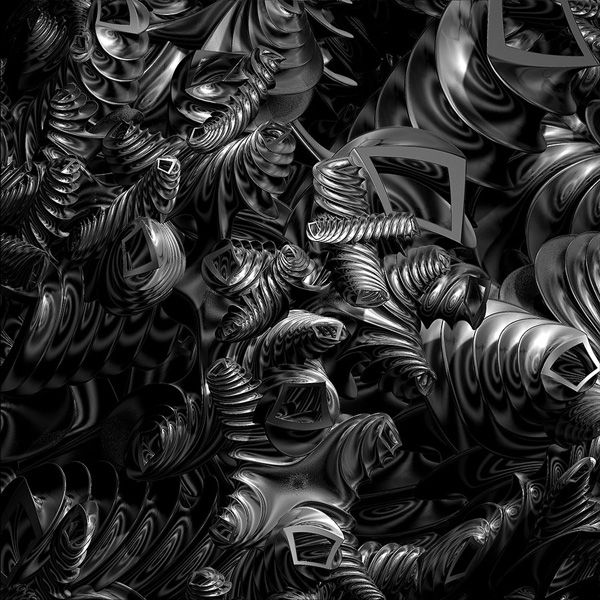 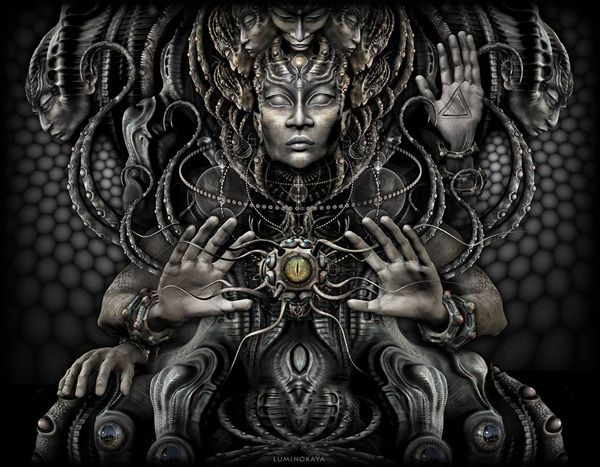 "Warlords Of Atlantis" by Luminokaya 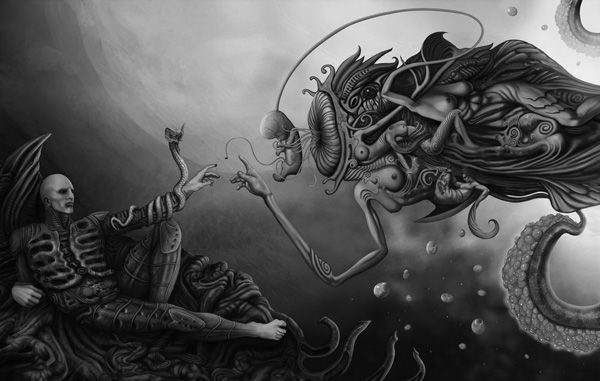 "Prometheus and God" by Dejano23 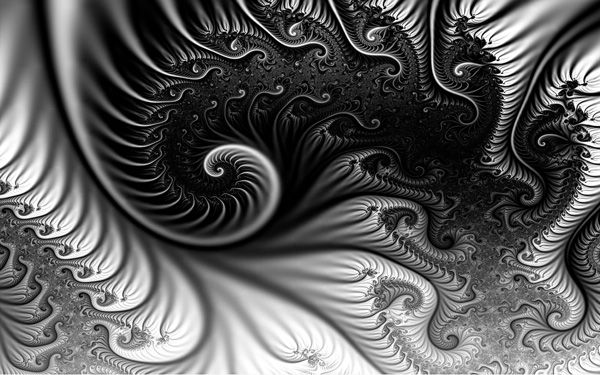