David Normal is a San Francisco painter and animator.  Born 1970 in San Francisco, he is the son of Paul Butterfield Blues Band keyboardist, Mark Naftalin.  Normal began his career in the late '80s making Punk fliers around the Bay Area. Throughout the '90s he created a series of what he dubbed “interactive theater parties” and also created large scale sculpture for the Burning Man Festival. Normal has traveled extensively in South-East Asia to document rituals of trance and spirit possession, an archive of video documents known as “Loose Spirits”.  He has produced two animated shorts, “The Bicycle Ride” and “Pyramid”, both expressions of his deep appreciation of the psychedelic experience. Since 2008 Normal has created a series of oil paintings based on his artistic philosophy of “Crazyology”, and displayed them throughout the U.S. and in Europe as unique glowing prints known as, “Illuminations.”  An ongoing side project involves drawing scenes of rope bondage from life in a series of life drawing sessions called “Shibari Sketch”, with multiple trips to Japan to work with masters of Japanese rope art.  In 2014 Normal created “Crossroads of Curiosity”, an epic suite of lightbox murals that was displated at Burning Man in 2014, and then traveled to London for exhibition at the British Library in 2015.

>How did you get started as an artist? 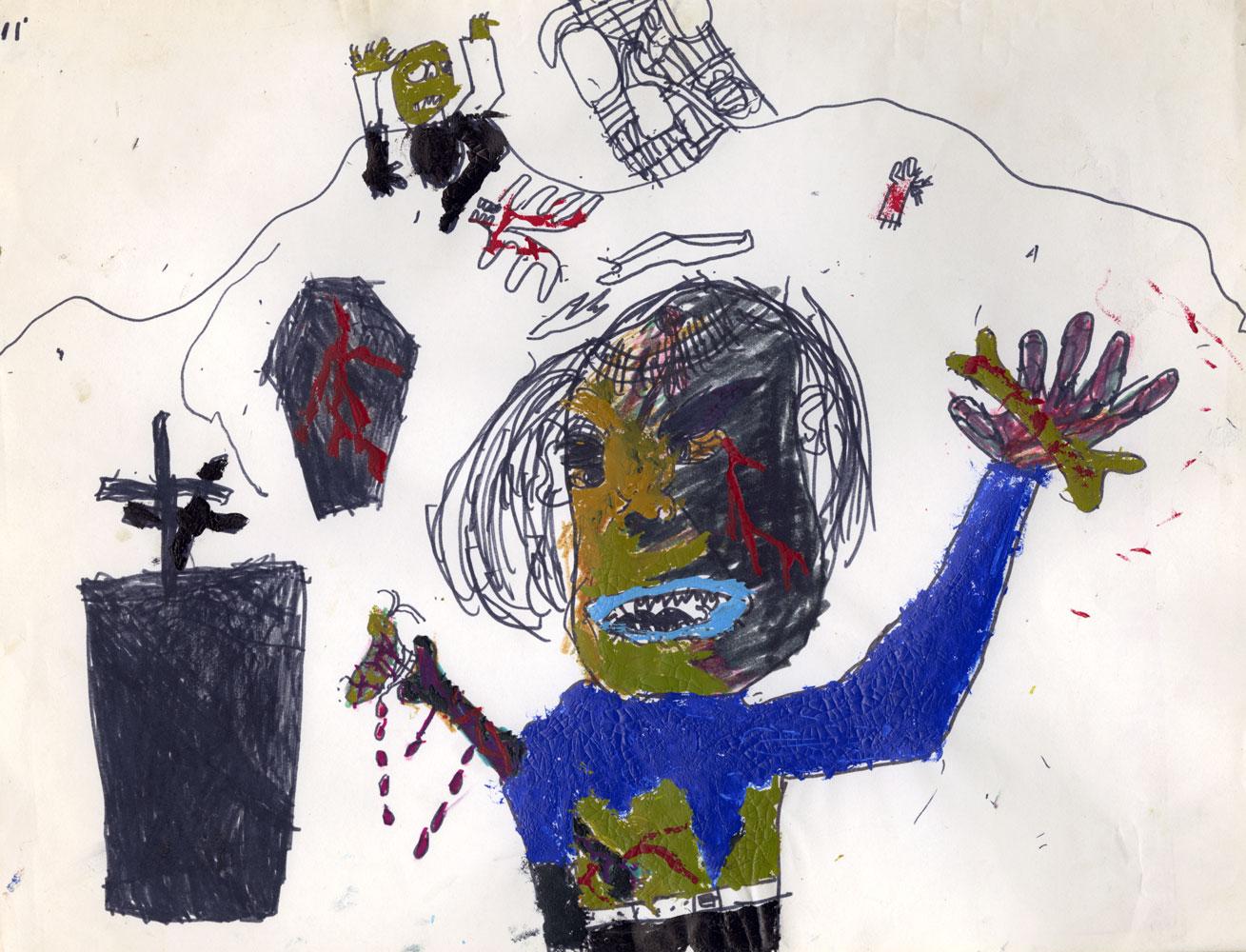 I did not think of myself as an artist as a child, I was just a “kid who draws”.  However, I drew more - a lot more -  than most children.  I started at about age 3, and, coming from an artistic home, I was exposed to Escher and Picasso, as well as underground cartoonists such as Victor Moscoso and Rick Griffin.  These artists, along with hot rod art, sci-fi and horror films, became primary childhood influences.   I nearly quit in my early teens, but in high school I found myself searching for a role with which to integrate myself into the difficult teen reality and I picked up the pen again and found I had this miraculous ability to draw like I had never been able to draw before.  I think it might have been better had I never fallen into considering myself an “artist” (but always merely a “kid who draws”), however as I began making flyers for the hardcore punk scene of the late ‘80s It was inevitable that I cleave to the identity of “artist” and I changed my name to David Normal when I was 16. 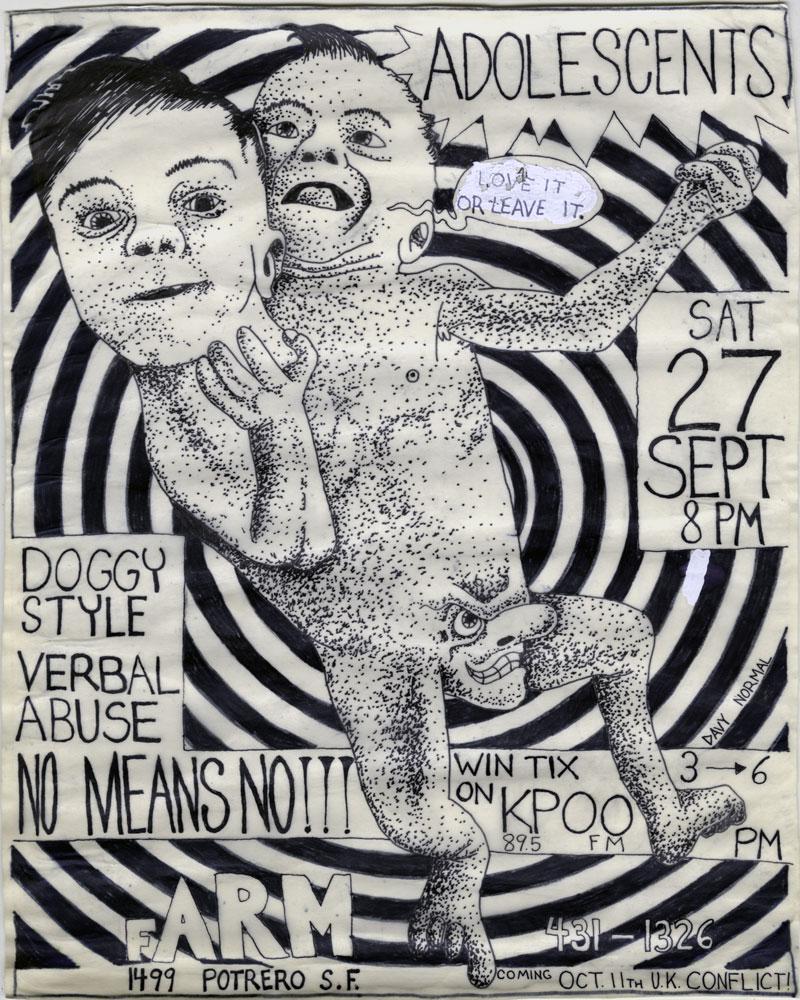 >Do psychedelic experience influence  your work ?

Yes, the psychedelic experience is an influence on my work, but not in the direct way that some might assume.  A lot of psychedelic art seems to focus on the ‘visuals’ - kaleidoscopic patterns, melting forms, glowing and saturated colors - one experiences while tripping.  However, in my opinion, this is like becoming preoccupied with the curtains of a theatre stage before the play opens rather than focusing on the drama itself.  For me these colorful hallucinations give way to deeper visions that are more akin to dreams than to lightshows.  In such dreams I meet with spirits who advise me, teach me and challenge me.  These encounters with spirits have guided the course of my life and work. 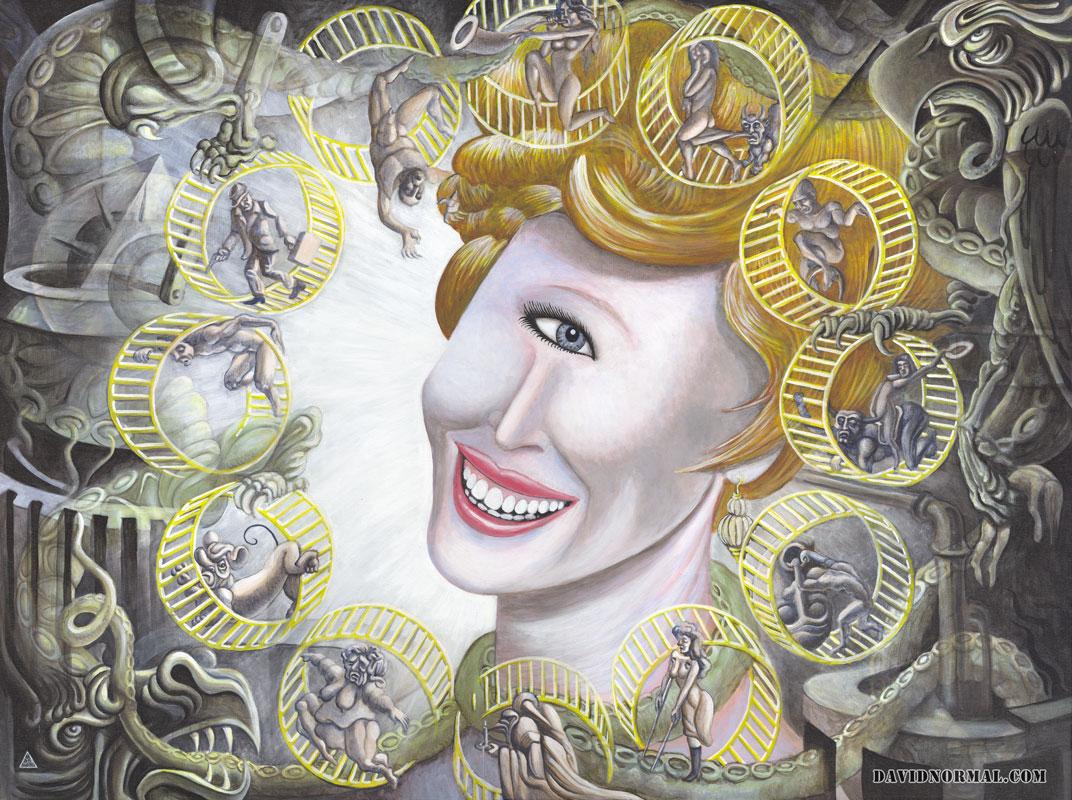 For example, the painting, “Samsara”, derives from an experience using 600µg of LSD.  I had a vision of being in a human society on a different planet where women were being genetically engineered to have only one eye, to be a cyclopean female race whose one eye not only binds them to servitude, but somehow deprived women of their very souls.  In an act of self-sacrifice for the sake of womankind, the very first of these genetically modified cyclopean females, “Sarah Samantha”, puts here eye out and is transmogrified into a goddess.  The painting, based on a video montage of the same name, plays with the theme of death and reincarnation.

>What kind of artwork do you create, and what kind of medium suits you best?

I call my style of art “Crazyology”.  Crazyology is a blanket term for intuitive, magical knowledge, as opposed to rational, logical knowledge.  As a young man I trained myself to have an easy rapport with my unconscious, dreaming mind so that visions and fantasies appear effortlessly in my mind’s eye.  For this reason my visions are not dependent on drug experiences, although the use of psychedelics helps to keep the gate between the conscious and unconscious open wide. 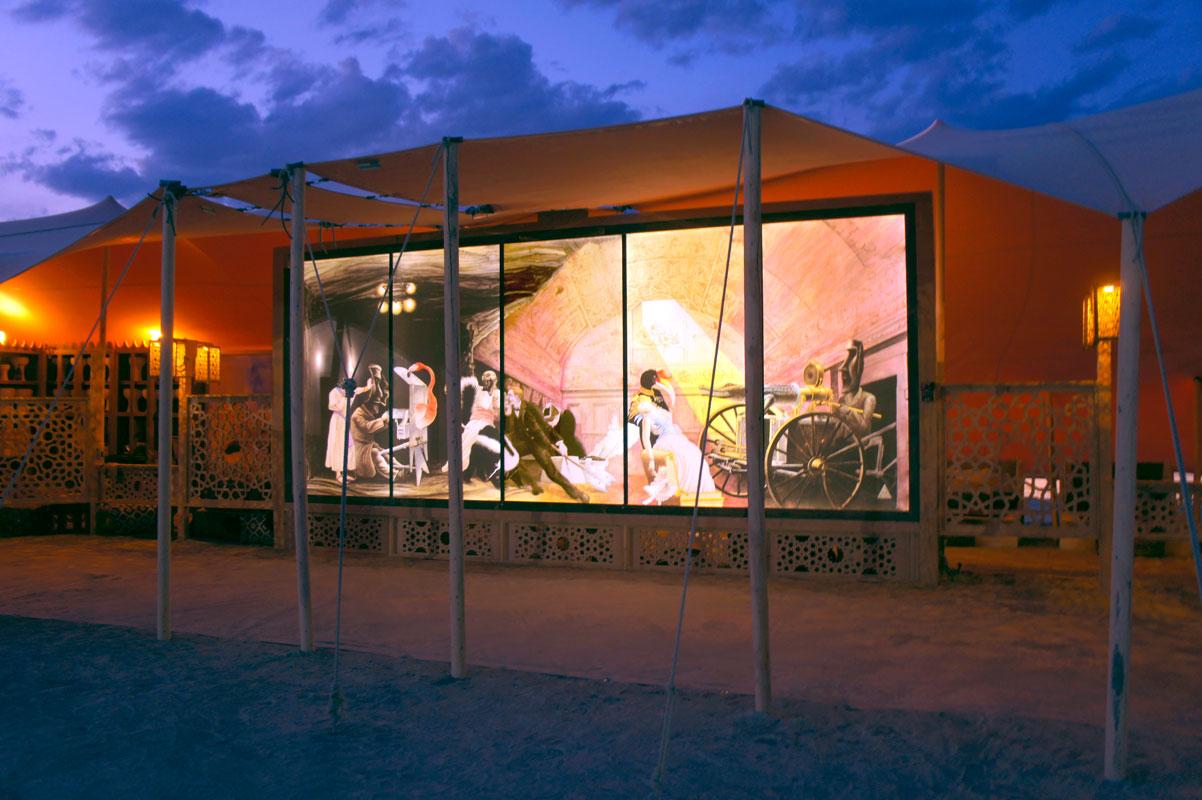 For the past few years I have produced installations of lightboxes, culminating with my “Crossroads of Curiosity” that appeared first at Burning Man 2014 and then was exhibited at the British Library, London  the following year.  Developing the lightboxes has allowed me to show my work in non-gallery spaces and the glowing art allows people to appreciate the work at festivals, nightclubs and other public spaces. 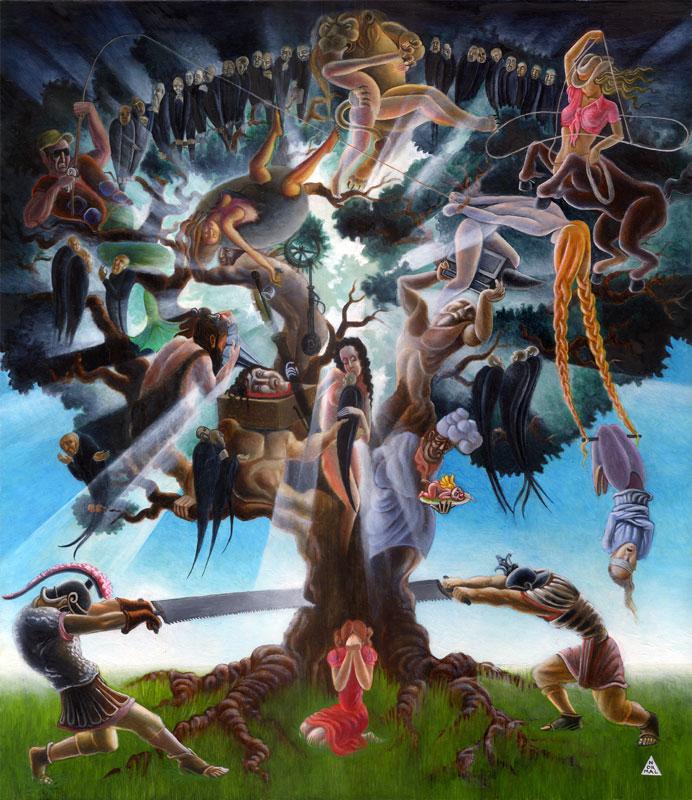 >What’s the meaning and message of your paintings?

I’ve eschewed direct meaning in my work.  Its not about a ‘message’.  My paintings do not tell you to “pray every night before you go to bed and don’t forget to brush your teeth and gargle first”, or anything else for that matter.  The artwork is the channeling of pure feeling into palpable, structured form.  It is actually no less abstract than a Willem de Koonig painting, however unlike an Abstract Expressionist painter I chose to develop the shapes and colors of my feelings into recognizable forms that interact with one another, and seem, superficially, to tell stories. 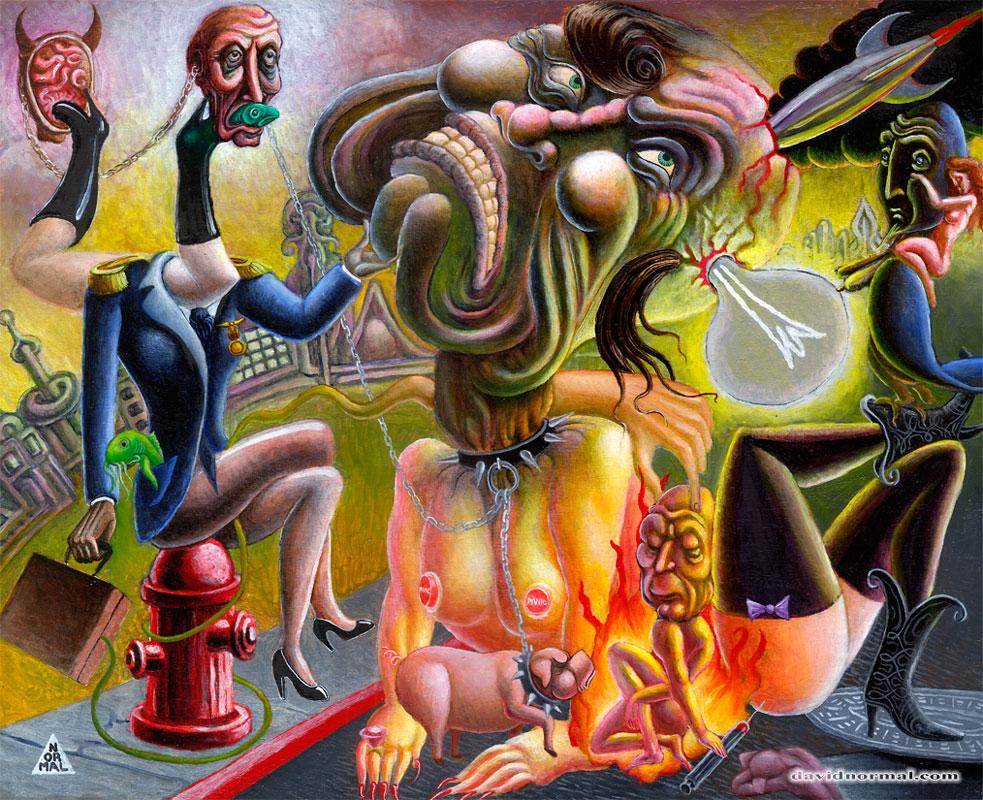 However, sometimes as I work on a painting stories and meanings develop that are as surprising to me as anyone.  Before creating “No Parking Zone” I was contacted on Myspace (remember that??) by a chihuahua named, “Chumley” to inquire about commissioning a portrait.  Now obviously this is someone pretending online to be their dog.  I tried to demur as politely as I could since I do not do pet portraits, but Chumley took offense and broke off negotiations with me unceremoniously.  As I was painting, “No Parking Zone”, I often felt some remorse that I had not been more obliging and painted the Chihuahua’s portrait in good humor.  Finally, as the painting neared completion, it dawned on me shockingly, that I had indeed painted the Chumley portrait!  Moreover, I had painted Chumley as myself, and myself as a dog on a leash.  “No Parking  Zone” was an unwitting self-portrait!!