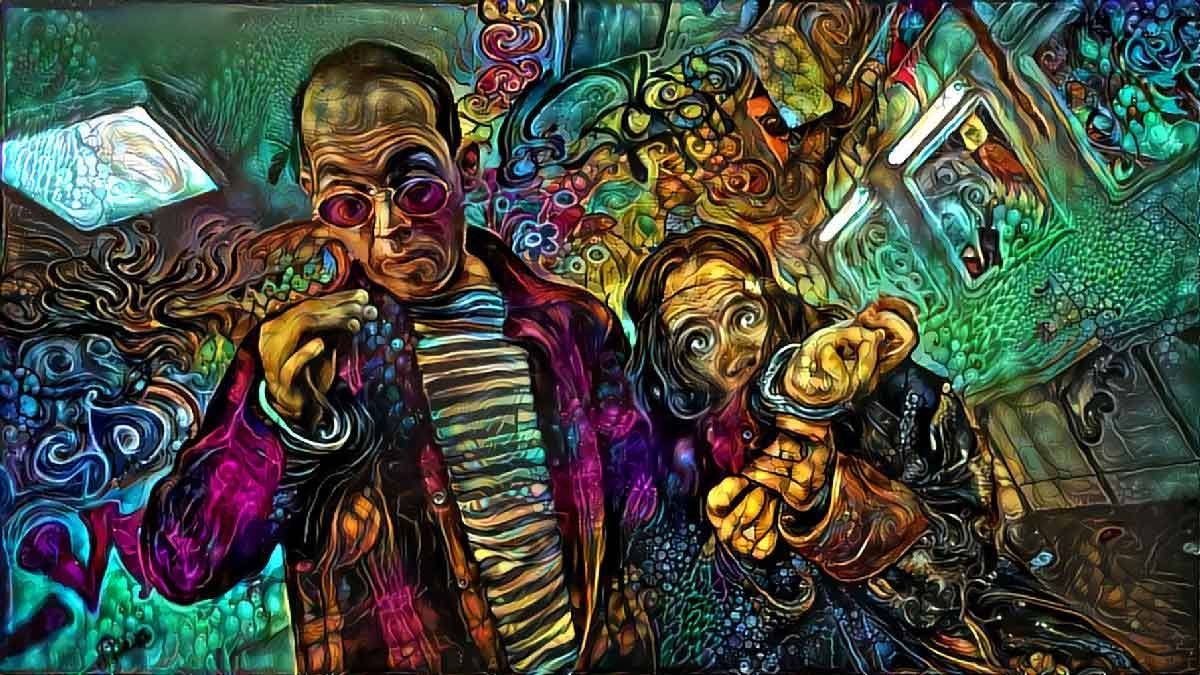 Mat Coll is an artist that creates Psychedelic images created using the DeepStyle method. His artist name and nickname is "Schizo". He is 41 years old and leaving and working in Germany. He says that his favorite culture is the Psychedelic Trance scene for about 25 years. So beside a normal job he tries to live and support this psychedelic lifestyle.

- How would you describe style transfer?

Style transfer is a lazy method of creating new images from existing ones. The results depend much on the style images that are used, so it is quite open for all kind of visual experiences- What came first for you - creating images or creating fractal animations?

- What came first for you - creating images or creating fractal animations?

I started creating fractal images about 30 years ago. Rendering was very slow. So animations were not really possible.
Made some raytracing and fractal stuff between 1997 and 2007 http://psykick.de/rot/
A new push came 2009, when new 3 dimensional fractals were discovered - the "Mandelbulb" and the "Mandelbox". Diving through 3 dimensional fractal worlds was much cooler.
So I started creating images with the program "Mandelbulb 3D" and the first animations followed in 2012.
Here a short history of my 25 years of fractal life: http://www.fractalforums.com/meet-and-greet/25-years-of-fractal-fascination/
From small black&white images to 4K VR worlds - what a development in computer technic. 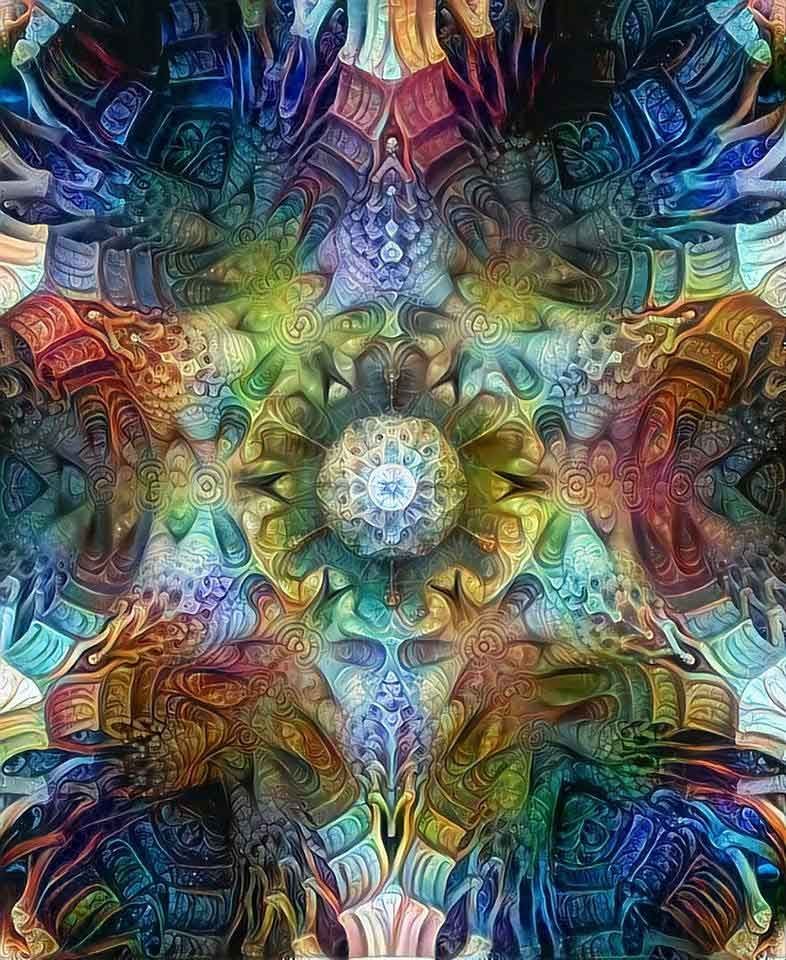 "Rising Star" based on a Mandelbulb 3D fractal by Steve Beeman

- How did you start making fractal and deep dream animation?

Well, the program "Mandelbulb 3D" has a great live navigator and a good animation tool. So with just some training it is quite easy to create such fractal flights.
I have made a tutorial on this topic - check it out, paly around and make your own flights:

Deep Dream images fascinated me since I saw them the first time. Making images is quite easy with some online tools.
But when you want to do animations, then you have to get the Deep Dream code running at your local computer. Not so easy under Windows and with GPU acceleration.
Well and I don't just want to do simple animations, but I want them in 4K and seamless in 360°. This required some more tricks and programming in python. So my Deep Dream animations are more a programming project.
You can find a short tutorial and the code here: http://psykick.de/deepdream_fractals/index.html

- What is the message of your animations, what are you aiming to present to a viewer?

There is not really a message in the animations. They are for relaxation, for VJ shows at parties, for outer space VR experiences, for fractal lovers, for seeing something new, aesthetic pleasure and just having a good experience.
But especially with the Deep Dream and Style Transfer projects I want to depict the images from the inner eye, the mind during altered states of consciousness.
Well, it is impossible because a psychedelic experience is a mix of all senses and not just the visuals. But the visual part can be depicted the best, so I give my best to give the viewer an impression of it. 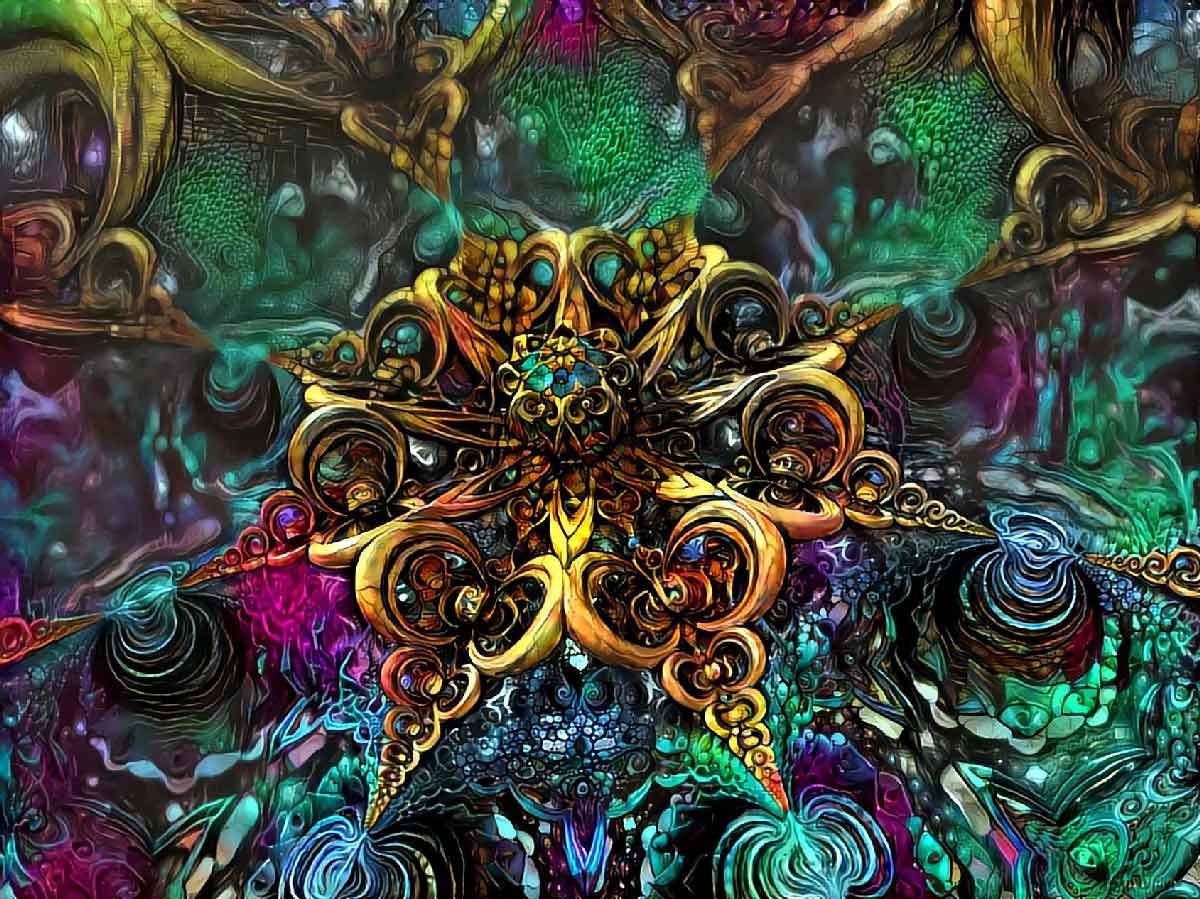 - You create images using the specific method. What exactly is the DeepStyle method?

Deep Style aka Style Transfer aka Neuralstyle is a quite new image processing method that uses neuronal networks to transfer the style from a style image (its colors, structures, shapes) to a base image.
So at the end you just need some clicks to create a new image and sometimes it is great. But I use often various styles sequentially and/or mix various results and do some post processing.
So the effort ranges from just some clicks to 1-2h of work. You don't need to be very talented like a real artist.
Is that art? I don't know, but I like the results and I hope others also do so. 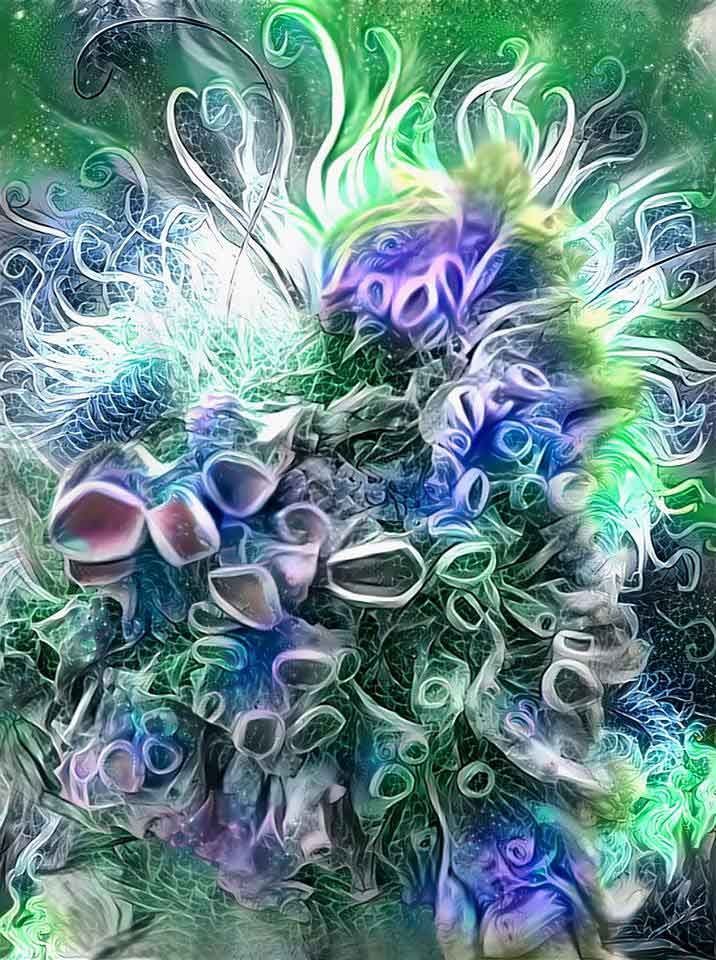 "Space Bud" neural style of a lichen in front of a twisted background dragon image.

There are too much to name them. Of course all of the common psychedelic artists and all the artists that support the psychedelic trance scene.

- Is there any work that you are most proud of? Why?

I think it's the video Acid Eye at the moment:

It is my first fractal deep dream VR project and depicts the psychedelic experience the best, especially at the end when the music peaks.

It is built from parts of an image that was the result of a style transfer to a completly black base image. So the structures you see are completly created by the neuronal network. I compiled various parts of the result image to this a chakra like form.
A large scale printed version was used at our last psytrance party. 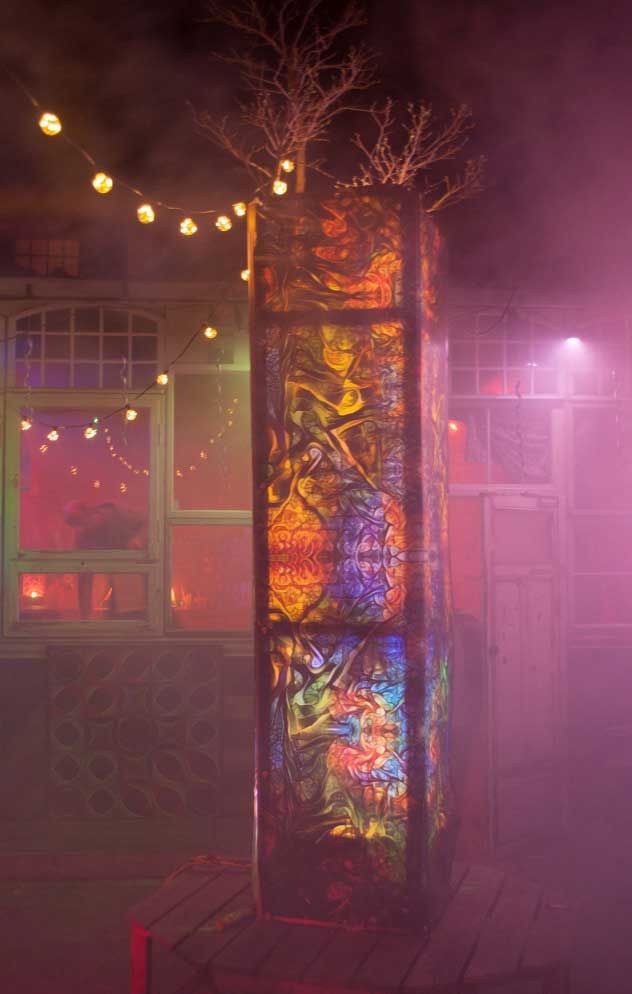 Continue to do fractal and deep dream animations, mostly as VR videos. But next target is to do style transfer animations.
When done the right way they should be even more trippy than deep dream animations and possibilities are much bigger, because the use of style images gives you so much freedom.

- What do you do in your spare time?

Spare time is always quite limited for all my ideas. Beside doing my art projects I support the local psytrance scene for many years: http://sachsentrance.de/
Plus I am a member of the psytrance party and deco crew Traumfahrergilde: https://www.facebook.com/traumfahrergilde/

Be a creator and not just a consumer. The possibilities are infinite. 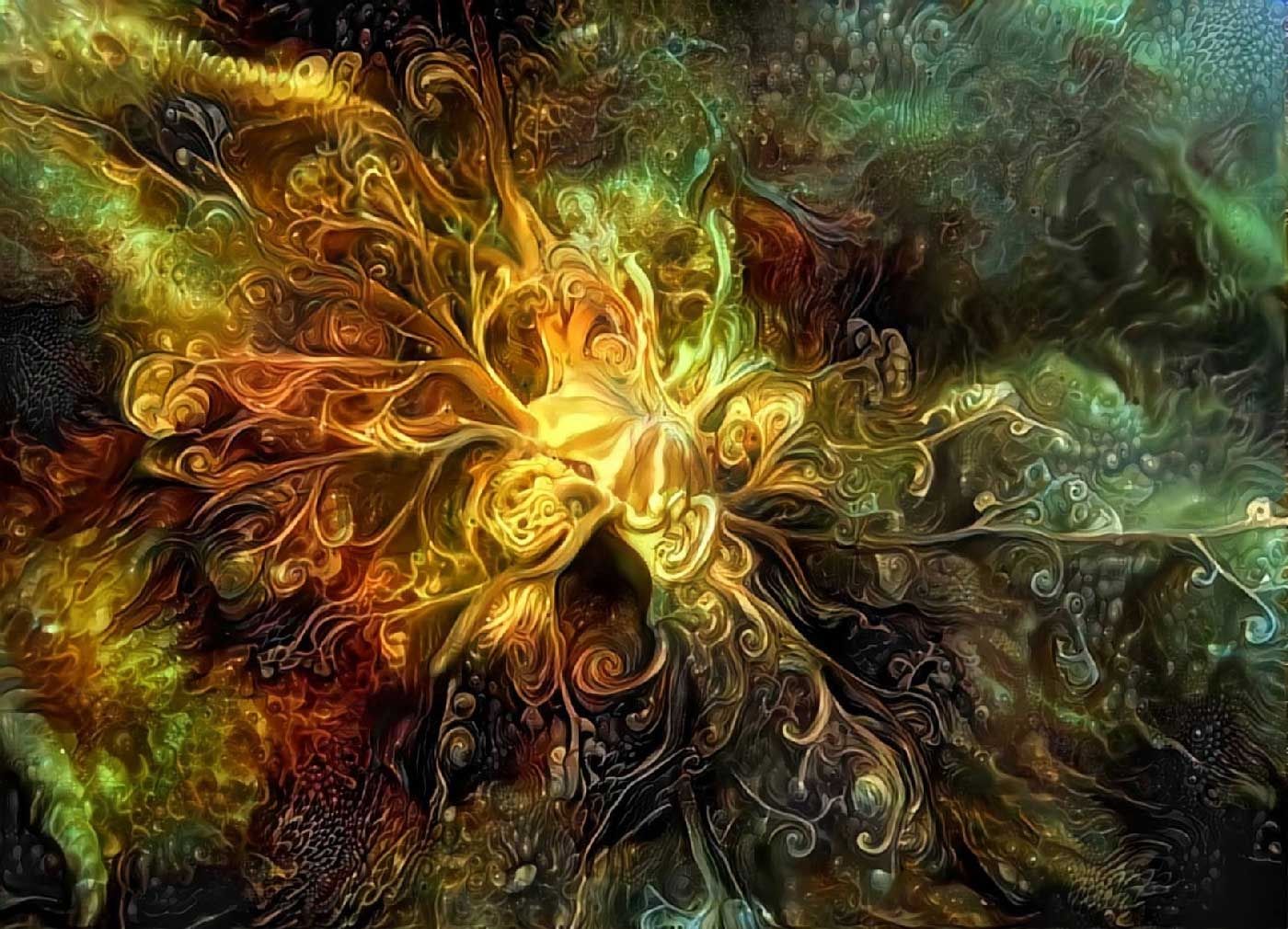 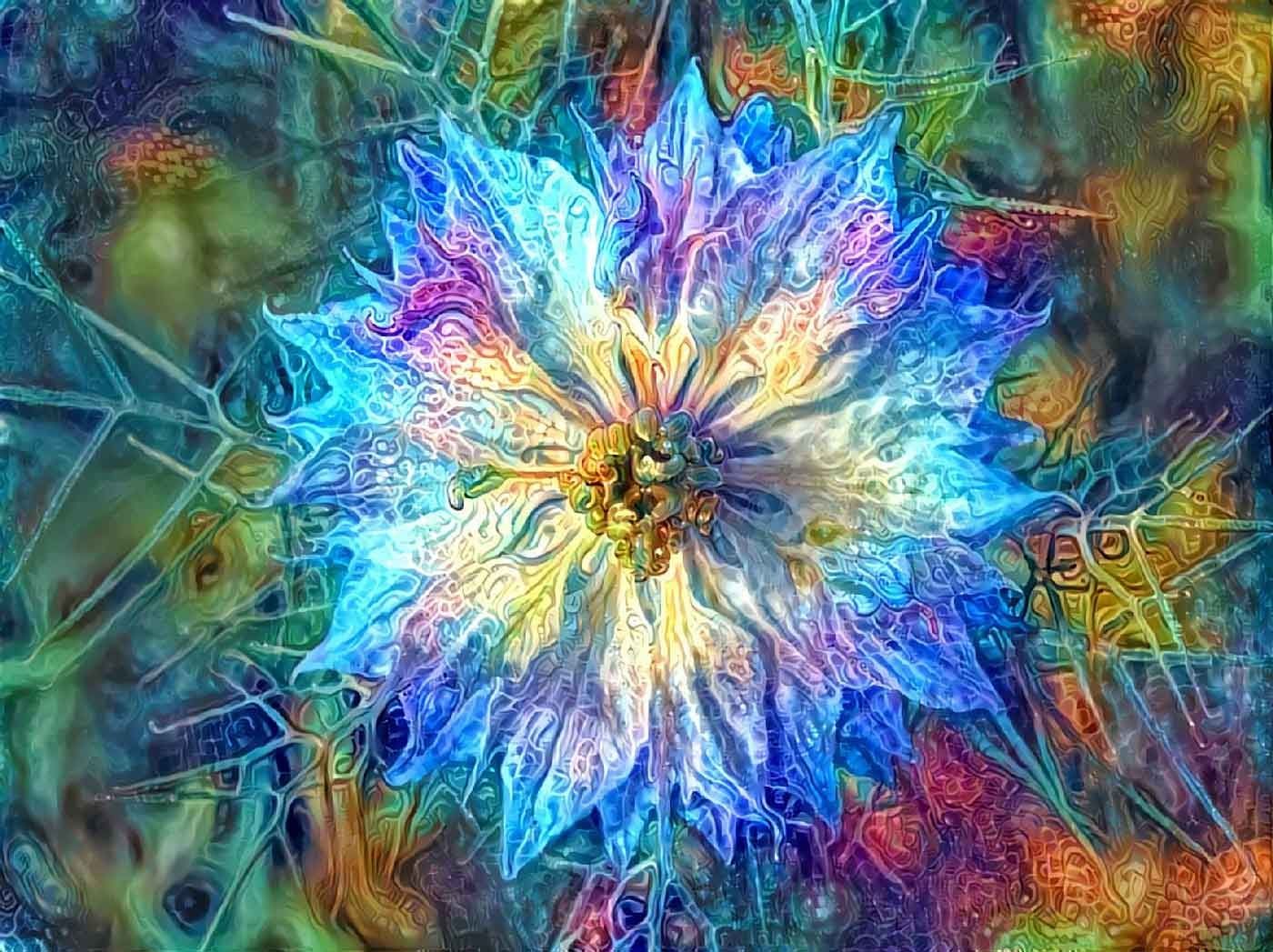 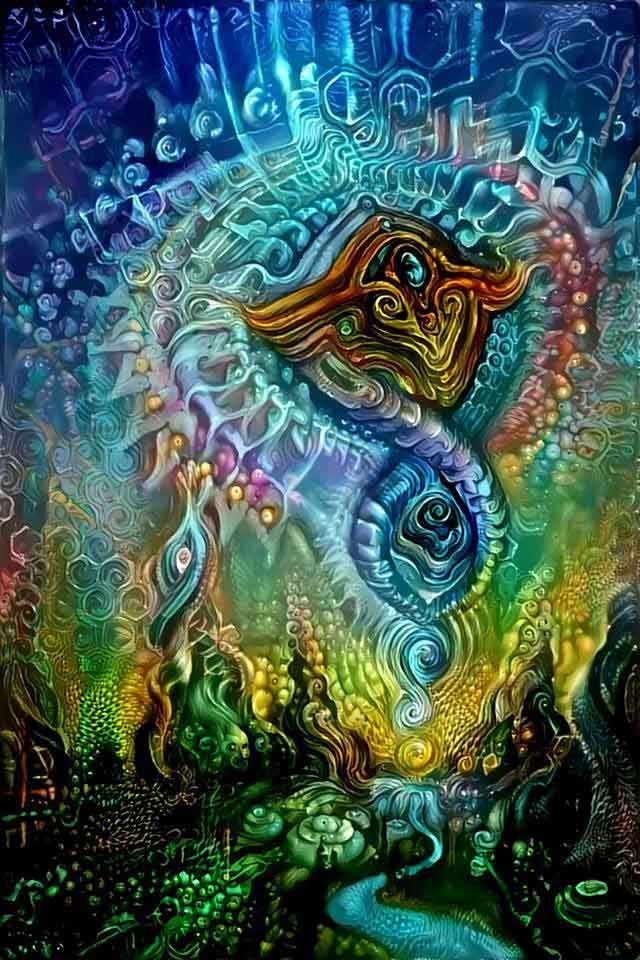