Sacred geometry, through it’s basic and complex patterns, represents the Great Design of the Universe. These sacred patterns of existence, present in many aspects of human culture since the the earliest times, enable us to understand the true nature and functioning of the Mystical Continuum, in its scientific, philosophical, psychological and aesthetic forms.

Sacred geometry is also incorporated in the the design of the sacred architecture and sacred art. Mathematical constants, ratios , proportions and geometry create light, music, cosmology and other observable and sentient features of Universe. Sacred geometry is the fundamental basis in the design of various structures of religious worship, such as megaliths, temples, churches, mosques, altars, sacred groves... Forms and patterns of sacred geometry are not always permanent, monolithic and enduring, they may be only temporary, such as sand painting, visualisations...

One of the most beautiful example of sacred geometry is the Flower of Life, which can be found in all major religions of the world. It is composed of the patterns of creation, which emerged from the Great Void. From Creator’s thought the seed of life was created, then the vortex motion was continued and formed the next structure called the Egg of Life. This structure is the basis of music, for the distances between the spheres perfectly match the distances between the tones and the half tones in music. Identical cellular structure can be found in the third embryonic division. Further developement of this structure creates the human body and all of the energy systems, alongside the ones used to create the Merkaba. By creating more spheres, we will eventually come to the structure called the Flower of Life. 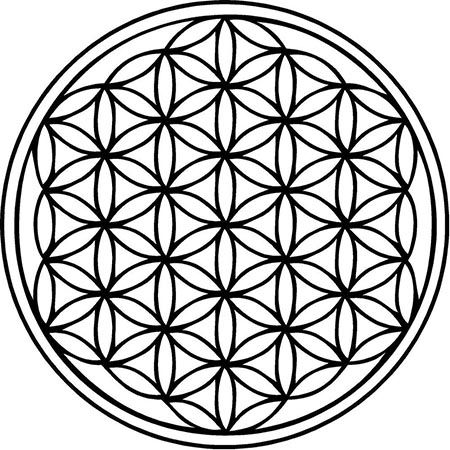 The flower of life holds a secret symbol created by drawing 13 circles out of the Flower of Life. By doing this, one can discover the most important and sacred pattern in the universe. This is the source of all that exists; it's called the Fruit of Life. It contains 13 informational systems. Each one explains another aspect of reality. Thus these systems are able to give us access to everything ranging from the human body to the galaxies. In the first system, for example, it's possible to create any molecular structure and any living cellular structure that exists in the universe. In short every living creature.

The most common form of the "Flower of Life" is hexagonal pattern (where the center of each circle is on the circumference of six surrounding circles of the same diameter), made up of 19 complete circles and 36 partial circular arcs, enclosed by a large circle.

The "Seed of Life" is formed from seven circles being placed with sixfold symmetry, forming a pattern of circles and lenses, which acts as a basic component of the Flower of Life's design. 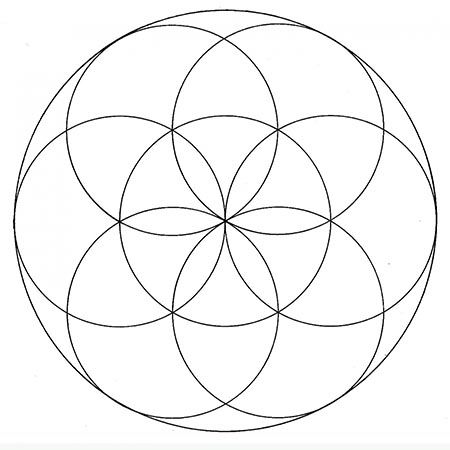 The Temple of Osiris at Abydos, Egypt contains the oldest to date example. it is carved in granite and may possibly represent the Eye of Ra a symbol of the authority of the pharaoh. Other examples can be found in Phoenician, Assyrian, Indian, Asian, Middle Eastern, and medieval art.