Perhaps the most admired and discussed symbol of Buddhist religion and art is the mandala, a word which, like guru and yoga, has become part of the English language. Its popularity is underscored by the use of the word mandala as a synonym for sacred space in scholarship world over, and by its presence in English-language dictionaries and encyclopedias. Both broadly define mandalas as geometric designs intended to symbolize the universe, and reference is made to their use in Buddhist and Hindu practices.

The mandala idea originated long ago before the idea of history itself. In the earliest level of India or even Indo-European religion, in the Rig Veda and its associated literature, mandala is the term for a chapter, a collection of mantras or verse hymns chanted in Vedic ceremonies, perhaps coming from the sense of round, as in a round of songs. The universe was believed to originate from these hymns, whose sacred sounds contained the genetic patterns of beings and things, so there is already a clear sense of mandala as world-model.

The word mandala itself is derived from the root manda, which means essence, to which the suffix la, meaning container, has been added. Thus, one obvious connotation of mandala is that it is a container of essence. As an image, a mandala may symbolize both the mind and the body of the Buddha. In esoteric Buddhism the principle in the mandala is the presence of the Buddha in it, but images of deities are not necessary. They may be presented either as a wheel, a tree, or a jewel, or in any other symbolic manifestation.

Creation of a Mandala

The origin of the mandala is the center, a dot. It is a symbol apparently free of dimensions. It means a 'seed', 'sperm', 'drop', the salient starting point. It is the gathering center in which the outside energies are drawn, and in the act of drawing the forces, the devotee's own energies unfold and are also drawn. Thus it represents the outer and inner spaces. Its purpose is to remove the object-subject dichotomy. In the process, the mandala is consecrated to a deity. 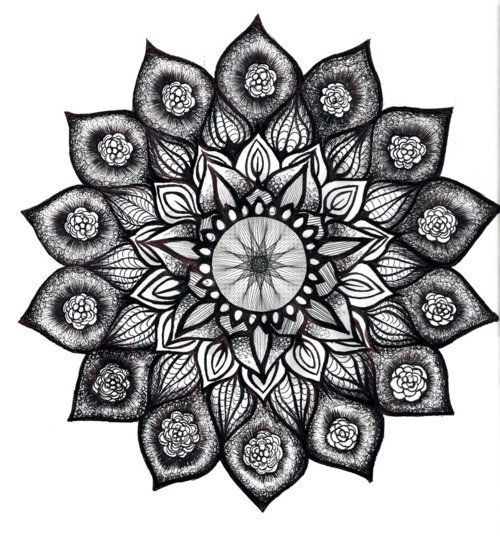 In its creation, a line materializes out of a dot. Other lines are drawn until they intersect, creating triangular geometrical patterns. The circle drawn around stands for the dynamic consciousness of the initiated. The outlying square symbolizes the physical world bound in four directions, represented by the four gates; and the midmost or central area is the residence of the deity. Thus the center is visualized as the essence and the circumference as grasping, thus in its complete picture a mandala means grasping the essence.

Construction of a Mandala

Before a monk is permitted to work on constructing a mandala he must undergo a long period of technical artistic training and memorization, learning how to draw all the various symbols and studying related philosophical concepts. At the Namgyal monastery (the personal monastery of the Dalai lama), for example, this period is three years.

In the early stages of painting, the monks sit on the outer part of the unpainted mandala base, always facing the center. For larger sized Mandalas, when the mandala is about halfway completed, the monks then stand on the floor, bending forward to apply the colors.

Traditionally, the mandala is divided into four quadrants and one monk is assigned to each. At the point where the monks stand to apply the colors, an assistant joins each of the four. Working co-operatively, the assistants help by filling in areas of color while the primary four monks outline the other details.

The monks memorize each detail of the mandala as part of their monastery's training program. It is important to note that the mandala is explicitly based on the Scriptural texts. At the end of each work session, the monks dedicate any artistic or spiritual merit accumulated from this activity to the benefit of others. This practice prevails in the execution of all ritual arts.

There is good reason for the extreme degree of care and attention that the monks put into their work: they are actually imparting the Buddha's teachings. Since the mandala contains instructions by the Buddha for attaining enlightenment, the purity of their motivation and the perfection of their work allows viewers the maximum benefit.

Each detail in all four quadrants of the mandala faces the center, so that it is facing the resident deity of the mandala. Thus, from the perspective of both the monks and the viewers standing around the mandala, the details in the quadrant closest to the viewer appear upside down, while those in the most distant quadrant appear right side up.

Generally, each monk keeps to his quadrant while painting the square palace. When they are painting the concentric circles, they work in tandem, moving all around the mandala. They wait until an entire cyclic phase or layer is completed before moving outward together. This ensures that balance is maintained, and that no quadrant of the mandala grows faster than another.

The preparation of a mandala is an artistic endeavor, but at the same time it is an act of worship. In this form of worship concepts and form are created in which the deepest intuitions are crystallized and expressed as spiritual art. The design, which is usually meditated upon, is a continuum of spatial experiences, the essence of which precedes its existence, which means that the concept precedes the form.

n its most common form, the mandala appears as a series of concentric circles. Each mandala has its own resident deity housed in the square structure situated concentrically within these circles. Its perfect square shape indicates that the absolute space of wisdom is without aberration. This square structure has four elaborate gates. These four doors symbolize the bringing together of the four boundless thoughts namely - loving kindness, compassion, sympathy, and equanimity. Each of these gateways is adorned with bells, garlands and other decorative items. This square form defines the architecture of the mandala described as a four-sided palace or temple. A palace because it is the residence of the presiding deity of the mandala, a temple because it contains the essence of the Buddha.

The series of circles surrounding the central palace follow an intense symbolic structure. Beginning with the outer circles, one often finds a ring of fire, frequently depicted as a stylized scrollwork. This symbolizes the process of transformation which ordinary human beings have to undergo before entering the sacred territory within. This is followed by a ring of thunderbolt or diamond scepters (vajra), indicating the indestructibility and diamond like brilliance of the mandala's spiritual realms.

In the next concentric circle, particularly those mandalas which feature wrathful deities, one finds eight cremation grounds arranged in a wide band. These represent the eight aggregates of human consciousness which tie man to the phenomenal world and to the cycle of birth and rebirth.

Finally, at the center of the mandala lies the deity, with whom the mandala is identified. It is the power of this deity that the mandala is said to be invested with. Most generally the central deity may be one of the following three:

A peaceful deity symbolizes its own particular existential and spiritual approach. For example, the image of Boddhisattva Avalokiteshvara symbolizes compassion as the central focus of the spiritual experience; that of Manjushri takes wisdom as the central focus; and that of Vajrapani emphasizes the need for courage and strength in the quest for sacred knowledge. 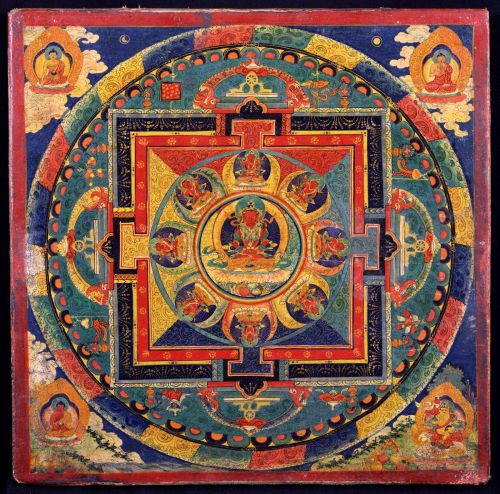 Wrathful deities suggest the mighty struggle involved in overcoming one's alienation. They embody all the inner afflictions which darken our thoughts, our words, and our deeds and which prohibit attainment of the Buddhist goal of full enlightenment. Traditionally, wrathful deities are understood to be aspects of benevolent principles, fearful only to those who perceive them as alien forces. When recognized as aspects of one's self and tamed by spiritual practice, they assume a purely benevolent guise. 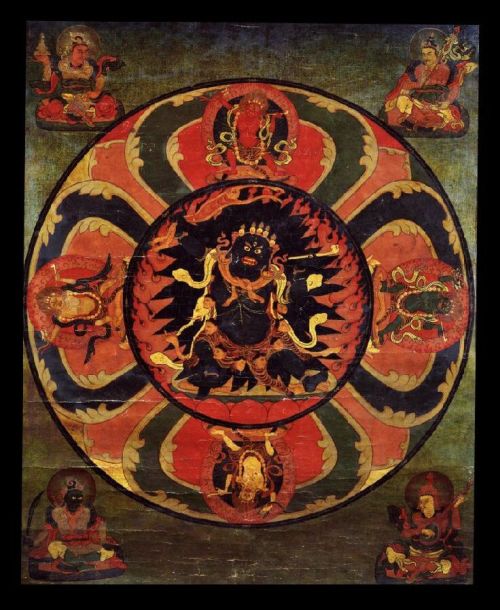 Sexual imagery suggests the integrative process which lies at the heart of the mandala. Male and female elements are nothing but symbols of the countless pairs of opposites (e.g. love and hate; good and evil etc.) which one experiences in mundane existence. The initiate seeks to curtail his or her alienation, by accepting and enjoying all things as a seamless, interconnected field of experience. Sexual imagery can also be understood as a metaphor for enlightenment, with its qualities of satisfaction, bliss, unity and completion. 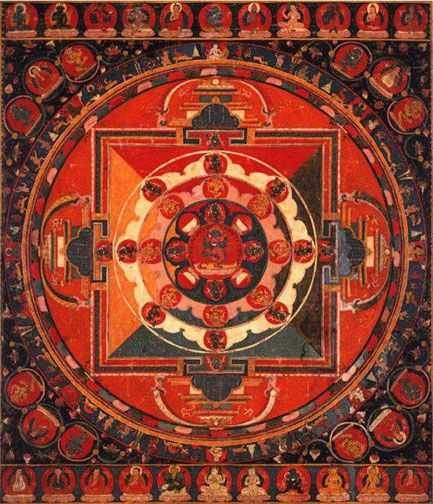 The Mandala as a Sacred Offering

In addition to decorating and sanctifying temples and homes, in Tibetan life the mandala is traditionally offered to one's lama or guru when a request has been made for teachings or an initiation - where the entire offering of the universe (represented by the mandala) symbolizes the most appropriate payment for the preciousness of the teachings. Once in a desolate Indian landscape the Mahasiddha Tilopa requested a mandala offering from his disciple Naropa, and there being no readily available materials with which to construct a mandala, Naropa urinated on the sand and formed an offering of a wet-sand mandala. On another occasion Naropa used his blood, head, and limbs to create a mandala offering for his guru, who was delighted with these spontaneous offerings.

The visualization and concretization of the mandala concept is one of the most significant contributions of Buddhism to religious psychology. Mandalas are seen as sacred places which, by their very presence in the world, remind a viewer of the immanence of sanctity in the universe and its potential in himself. In the context of the Buddhist path the purpose of a mandala is to put an end to human suffering, to attain enlightenment and to attain a correct view of Reality. It is a means to discover divinity by the realization that it resides within one's own self.